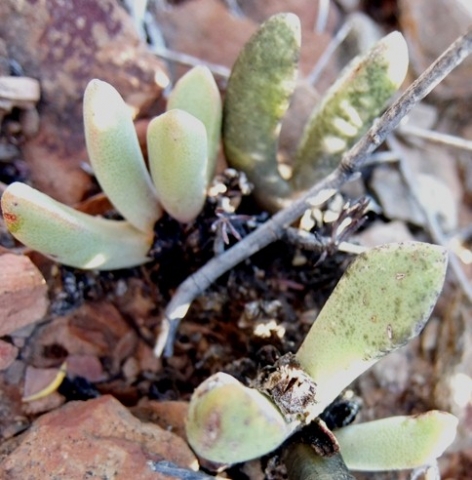 Pleiospilos compactus subsp. canus, commonly known in Afrikaans as kwaggavy (zebra fig), is a dwarf leaf-succulent of the Aizoaceae family bearing leaf pairs at ground level. It spreads to a small mat by producing up to three leaf pairs per branch. P. compactus subsp. canus was previously known officially by several other names including P. canus.

Yellow flowers grow solitary on very short or no stalks between the paired leaves. The narrowly paddle-shaped petals are long and often white near the base. Ring-shaped nectar glands, dark green in colour, surround the base of each of at least nine styles per flower. Flower diameter is about 3 cm.

Flowering happens in late autumn and winter; the flowers open only in the afternoon.

The plant's geographical distribution is in the Great Karoo from Calvinia in the north to the Little Karoo and eastwards into semi-arid parts of the Eastern Cape. Some records place this plant in the Bloemfontein area. This plant was seen near Oudtshoorn.

The habitat is barren stony slopes and outcrops where the plants live exposed to the elements. Small as they are, trampling is a risk in the open, the weather they can mostly deal with. The subspecies is not considered to be threatened in its habitat early in the twenty first century (Vlok and Schutte-Vlok, 2015; Smith, et al, 1988; www.llifle.com; http://redlist.sanbi.org).