Home » GENERA P » Pleiospilos » Pleiospilos bolusii
Back to Category Overview
Total images in all categories: 12,058
Total number of hits on all images: 7,353,523 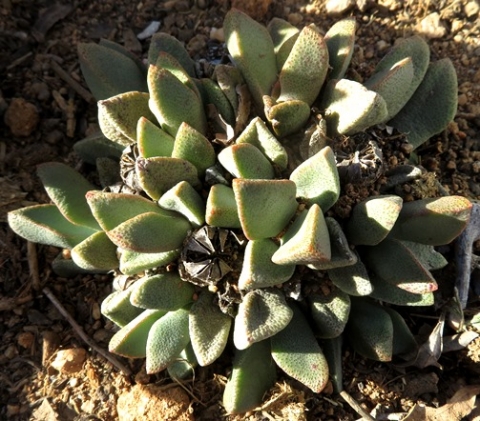 Pleiospilos bolusii, sometimes commonly called the many-spotted stone-plant and in Afrikaans as the kwagga-bal (zebra ball), is a ground-level, stemless, dwarf succulent growing a solitary leaf pair or branching sparsely to produce a few pairs. The stone-like leaves may be missed on the gravelly ground where they blend well with their surroundings.

The species resides in nature in the centre of the Great Karoo between Graaff-Reinet, Steytlerville and Beaufort West.

It grows among the Karoo scrub on stony and gravelly, quartzitic slopes and flats. The species is considered to be vulnerable in its habitat early in the twenty first century, mainly due to overgrazing by livestock and plant collection by people (Frandsen, 2017; Smith, et al, 1998; Gledhill, 1981; Herre, 1971; http://redlist.sanbi.org).