Home » GENERA P » Pegolettia » Pegolettia retrofracta
Back to Category Overview
Total images in all categories: 12,061
Total number of hits on all images: 7,359,652 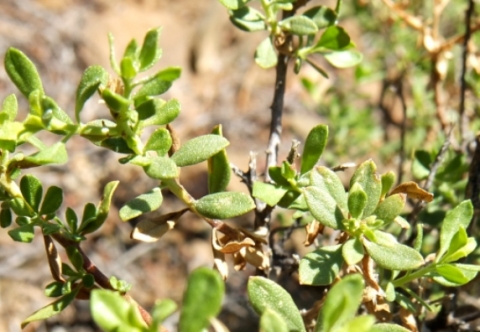 Pegolettia retrofracta, called draaibos (turn bush) in Afrikaans in the Little Karoo, grows to 60 cm in height. The same common name is also given to P. baccaridifolia, the other Pegolettia found there. The pale, whitish green, young branches often tilt southwards. This may have led to the draaibos name.

The wide-ranging distribution of this plant across southern Africa has greatest concentration in plant numbers in the west-central inland part of South Africa, but is also found in Namibia, Botswana, Lesotho and Zimbabwe. This plant was photographed near Oudtshoorn in the Little Karoo.

The habitat is inland scrubveld in arid and semi-arid regions, where the plants may grow among guarri, spekboom or karoobossies in loamy or sandy soils. The species is not considered to be threatened in its habitat early in the twenty first century (Vlok and Schutte-Vlok, 2015; iSpot; Wikipedia; http://redlist.sanbi.org).