Home » GENERA P » Pegolettia » Pegolettia baccaridifolia
Back to Category Overview
Total images in all categories: 12,061
Total number of hits on all images: 7,359,583 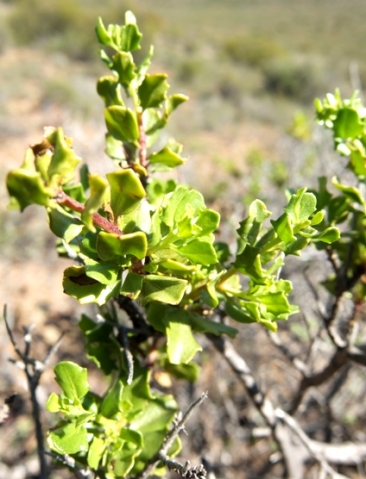 Pegolettia baccaridifolia, the draaibos (turn bush) in Afrikaans, is a woody shrub of the Asteraceae family that grows to 50 cm in height.

P. baccaridifolia flowerheads, like those of other members of their genus, lack ray florets. The flowerhead becomes 1 cm in diameter, bearing pale creamy-yellow or brightly yellow disc florets with narrow lobes. Two or three rows of pointed bracts form the involucre, from which the brush-like cluster of florets protrudes far. Flowering may occur at any time during the year after rain.

This plant of the Western and Eastern Cape is found from the Swartberge near Ladismith inland to the Eastern Cape. It grows on arid slopes of stony veld in clayey soils, often among spekboom or guarri. The photo was taken south of Oudtshoorn.

The species is not considered threatened in habitat early in the twenty first century (Vlok and Schutte-Vlok, 2010; Bond and Goldblatt, 1984; iSpot; www.redlist.sanbi.org).