Home » GENERA P » Pterygodium » Pterygodium hastatum
Back to Category Overview
Total images in all categories: 12,086
Total number of hits on all images: 7,387,286 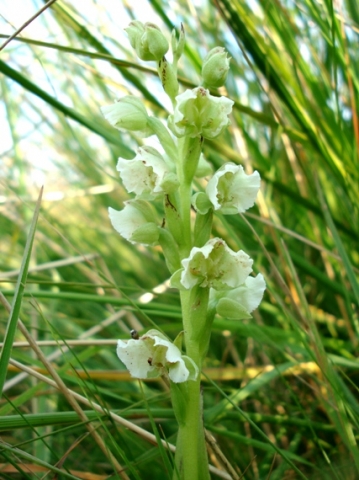 Pterygodium hastatum is a slender perennial herb, a terrestrial orchid growing to 35 cm in height from a globose tuber. The basal oblong leaf is larger than the one or two narrow stem leaves. The hairless leaves sheathe the stem, becoming up to 21 cm long nad borne fairly erectly. The specific name, hastatum (Latin), means spear-shaped. It may refer to the shape of either the leaf or the lip appendage in the flower centre.

The species distribution in the east of South Africa ranges from the Eastern Cape through KwaZulu-Natal to Mpumalanga and Limpopo. The plant is not a South African endemic.

Its habitat is damp places in rocky grassland, sometimes on cliffs or among scrub. Plants occur at altitudes from 1200 m to 2400 m in cool conditions, receiving summer rain. The species is not considered to be threatened in its habitat early in the twenty first century (Pooley, 1998; Germishuizen and Fabian, 1982; www.redlist.sanbi.org).