Home » GENERA P » Pterygodium » Pterygodium leucanthum
Back to Category Overview
Total images in all categories: 12,086
Total number of hits on all images: 7,387,151 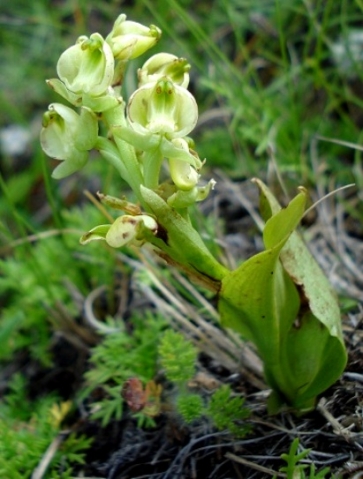 Pterygodium leucanthum is one of the bonnet orchids or in Afrikaans moederkappies (mother bonnets). These common names result from the shallow hoods formed by the upper three tepals of the flowers in the Pterygodium genus.

The plant grows above-ground leaves and flower stem annually from its perennial underground tuber, reaching heights from 25 cm to 40 cm. Two large ovate leaves grow from the base. They clasp the stem and taper to their tips. The leaves are about erect and variably curved. Smaller, lanceolate stem leaves decrease in size until they are bracts among the flowers.

The species distribution is in the north of the Eastern Cape and the southwest of KwaZulu-Natal. It also grows in Lesotho. The habitat is montane southern Drakensberg grassland at elevations between 1300 m and 2400 m. The species is not considered to be threatened in its habitat early in the twenty first century. This plant was seen flowering on January near Mokhotlong in the Drakensberg at the Lesotho border with KwaZulu-Natal (JSTOR; iSpot; Manning, 2009; Pooley, 1998).