Home » GENERA P » Pterygodium » Pterygodium flanaganii
Back to Category Overview
Total images in all categories: 12,086
Total number of hits on all images: 7,387,214 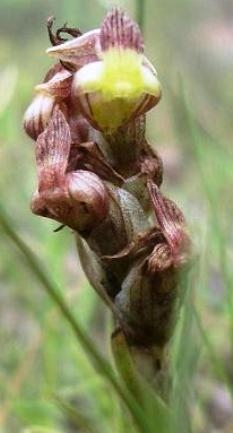 Pterygodium flanaganii, previously Corycium flanaganii is endemic to a part of the KwaZulu-Natal Drakensberg, inland montane grassland of the Eastern Cape and Lesotho. In spite of a restricted distribution, the species is stable in its habitat and not considered threatened early in the twenty first century. The plant flourishes particularly in habitat during the first season after a grass fire.

The genus of Corycium has recently been sunken into Pterygodium. All 14 of the erstwhile Corycium species are from southern Africa up to Tanzania and Malawi (www.redlist.sanbi.org; www.pacificbulbsociety.org).