Home » GENERA P » Pterygodium » Pterygodium nigrescens flowers
Back to Category Overview
Total images in all categories: 9,976
Total number of hits on all images: 4,686,047 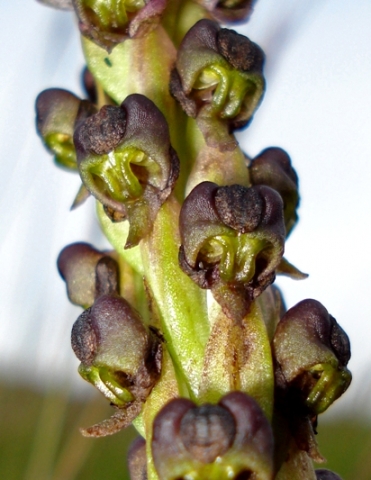 The flowers of Pterygodium nigrescens fit the common name of monkshood orchid. There were no monks yet in the times of the ancient Greeks; the “blooms” assuming that colour and shape in human society came only with the Middle Ages. In Afrikaans the common name is moederkappie (mother’s bonnet); local men’s hats never presented a fitting likeness. But headgear it is when likeness is sought for this flower-shape, although the flowers are so small.

The small black or brown flowers grow in a dense spike. The bracts, yellowish and fleshy in picture, are erect with pointed tips. The rounded, dorsal sepal is slightly smaller than the pair of lateral sepals that are partly joined; all three tending to pale green when young. In picture they are mainly purplish brown like the two concave lateral petals that huddle above the lateral sepals and flanking the dorsal one in the compact, globose shape.

The lip of the flower, positioned below in this species of which the flowers twist, is wedge-shaped and forwardly protruding. The tip of the lip is variously shaped from notched to ending abruptly; the lip appendage covers the stigma. The ovary is about 1,5 cm long.