Home » GENERA P » Pterygodium » Pterygodium nigrescens
Back to Category Overview
Total images in all categories: 9,976
Total number of hits on all images: 4,686,047 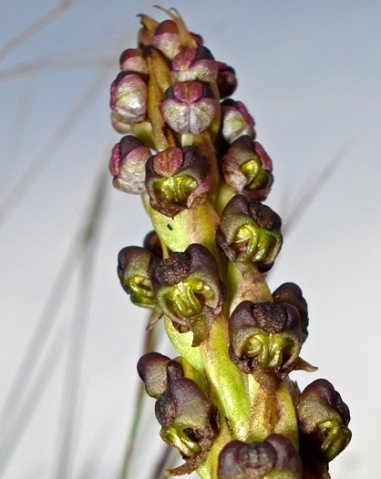 Pterygodium nigrescens, previously Corycium nigrescens, commonly the black-faced orchid, a feature confirmed by the specific name, nigrescens (Latin for blackish), is a slender to robust terrestrial with small dark flowers. The plant is a tuberous perennial that grows to 50 cm. To the top of the inflorescence in picture the flowers show some pinkish colouring on the median sepals, buff on the bracts.

The species distribution is widespread in the east of South Africa from the Outeniqua Mountains near Mossel Bay through the Eastern Cape and KwaZulu-Natal, inland in the Lowveld of Mpumalanga and Limpopo and northwards in neighbouring countries to Malawi and Tanzania. The photo is from the Steenkampsberge in Mpumalanga.

The habitat is predominantly summer rainfall grassland to elevations of 3000 m, often mountainous terrain. The species is not considered threatened in its habitat early in the twenty first century (Liltved and Johnson, 2012; Pooley, 1998; www.plantzafrica.com; www.redlist.sanbi.org).