Home » GENERA I-L » Lobelia » Lobelia coronopifolia
Back to Category Overview
Total images in all categories: 8,940
Total number of hits on all images: 3,961,083 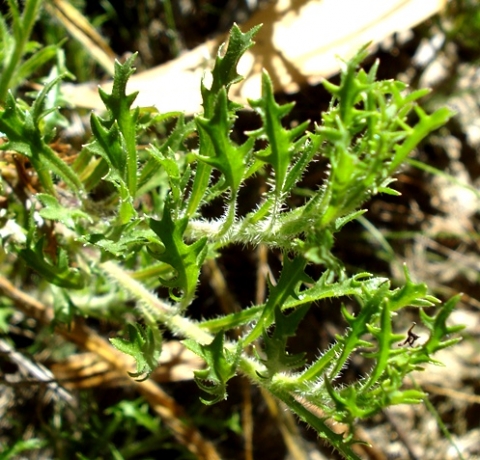 Previous
Image 8 of 31
Next

Lobelia coronopifolia is a tufted, soft shrublet reaching heights around 30 cm. The spreading stems branching from the base are soft, whitish and hairy.

The toothed or lobed leaves are narrow to lance-shaped, hairy in picture on their lower parts or winged stalks. The largest lobes are near the leaf centre, curving up on the plant in picture, the leaves folding in slightly at their midribs. Leaf dimensions are up to 4 cm by 5 mm.

The specific name, coronopifolia, is derived from the Greek corona (crown), ops (ability) and folium (leaf), relating to the crown-like leaf margins.

The species distribution in the west of the Western Cape from the Cape Peninsula to Clanwilliam. This plant was seen on the Paardeberg near Riebeek West.

The habitat is winter rainfall stony flats and lower slopes where the plants grow in sandy soils. The species is not considered to be threatened in its habitat early in the twenty first century (Manning, 2007; Bond and Goldblatt, 1984; Andrew, 2012; www.plantzafrica.com; www.redlist.sanbi.org).