Home » GENERA I-L » Lobelia » Lobelia chamaepitys flowers
Back to Category Overview
Total images in all categories: 8,946
Total number of hits on all images: 3,962,515 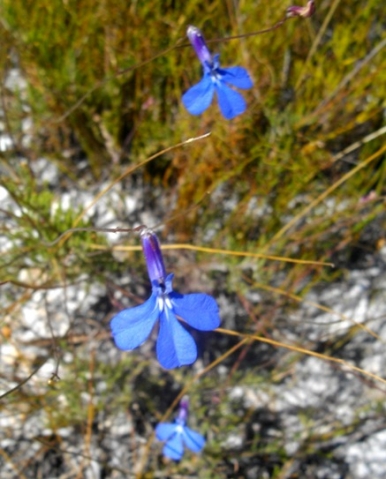 Previous
Image 6 of 31
Next

The bright blue to violet-blue flowers of Lobelia chamaepitys grow on long leafless stalks that are pale brown or maroon in colour and wiry. The flowers, appearing mostly solitary, are up to 1,6 cm long and hairless. Small and narrow, dark coloured sepals are positioned around the base of the corolla.

The corolla tube is presented horizontally, about half as long as the flower. The lower lip of the corolla has three larger, spreading lobes, each with a narrow white line near the base. These rounded lobes fold in slightly along their midribs. The upper lip of the corolla has two narrow, erect lobes, small and split to the base. The stamens are attached to the petal bases, the anthers attached to each other, positioned in the split between the upper lip lobes.

Flowers appear from spring to autumn (Bean and Johns, 2005; iSpot).