Home » GENERA I-L » Lobelia » Lobelia chamaepitys flower
Back to Category Overview
Total images in all categories: 8,952
Total number of hits on all images: 3,967,950 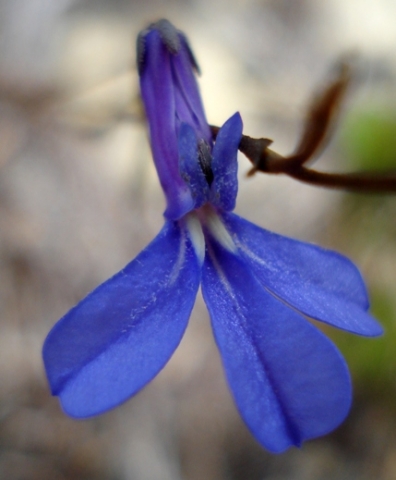 Previous
Image 5 of 31
Next

Seen close-up the corolla lobes of Lobelia chamaepitys appear to have some sparsely scattered, whitish hairs upon their lower parts, also on the two small pointed lobes of the upper lip. Apart from the two conspicuous white markings at the margins of lobes on the lower lip, there is a faint white line in the centre of each of these lobes at the base, coinciding with the fold. The lobe tips of the lower lip appear mucronate, slight protruding points breaking the smooth curve where the fold ends.

The corolla tube shows petals folding over each other below the tiny dark pointed sepals at the base. The column of stamens is exposed through this split, although not properly in view here, hidden behind the upper lip. The sepal tips are slightly raised from the corolla, not quite adhering.

Lobelia flowers are grouped according to the brush-like tuft of straight white hairs at the anther tips: in some species the hairs appear on all anthers, in others the hairs are found only on the lower two. L. chamaepitys has hairs on all its anthers (Bean and Johns, 2005; Manning, 2007).