Home » GENERA I-L » Lachenalia » Lachenalia carnosa being eaten
Back to Category Overview
Total images in all categories: 11,018
Total number of hits on all images: 5,656,285 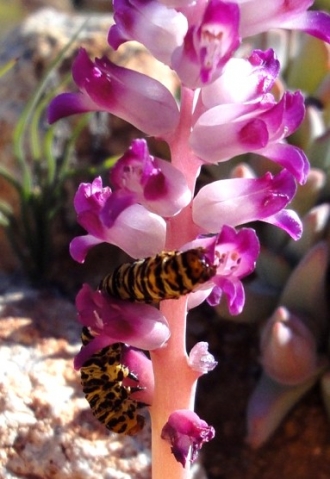 These Lachenalia carnosa flowers were seen near Concordia in Namaqualand during September. The flower stalk in picture shows translucence against the light.

There was already another lunch guest, believed to belong to the Diaphone eumela species found in southern Africa. This caterpillar, to become a moth with nocturnal habits, is commonly known as cherry spot or lily borer; the latter name leaving no doubt as to its intentions (Wikipedia).