Home » GENERA I-L » Lachenalia » Lachenalia carnosa flowers
Back to Category Overview
Total images in all categories: 11,018
Total number of hits on all images: 5,656,425 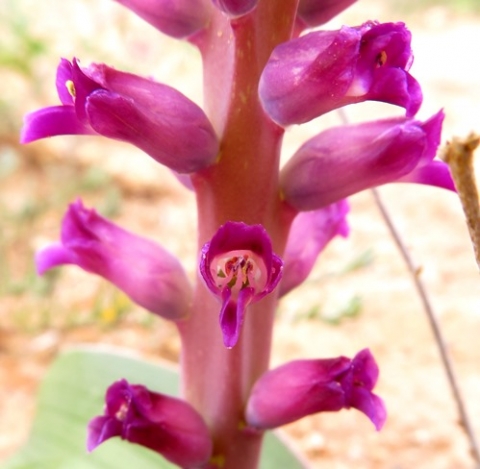 Lachenalia carnosa flowers are sessile, spiralling or scattered around a thick, erect stem.

The urn-shaped corolla tube is most colourful at its tip. Pale purple or white near the base, the outer as well as inner tepals end in bright pink-purple, maroon or crimson tips. Particularly the lowest tepal of the perianth, one of the inner three that are longer, curves down markedly. The flowers become about 7 mm to 10 mm long.

The yellow, orange or dark anthers, as well as the stigma, are usually visible in the open flower mouths, but not exserted, shorter than the tepals. The stamens emerge from two levels inside the perianth.

Flowering usually happens late in winter and early in spring, particularly when moisture has arrived as impetus. The photo was taken in August of a good rain year (Williamson, 2010; Le Roux, et al, 2005; Eliovson, 1990; iNaturalist).