Home » GENERA I-L » Lachenalia » Lachenalia carnosa from above
Back to Category Overview
Total images in all categories: 11,018
Total number of hits on all images: 5,656,319

Lachenalia carnosa from above 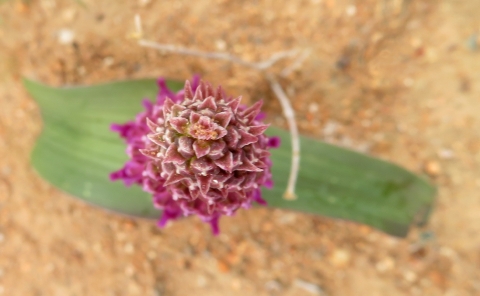 From above the Lachenalia carnosa inflorescence shows more crowded, pointed bracts than flowers. Colourful tepal tips protrude lower down and a few more may appear higher up later, but some upper flowers will probably never develop.

Lachenalia last flowers near or at the top of the spike or raceme are generally often sterile or simply absent, their places marked by their bracts as here.

The unequal leaves spread on opposite sides of the inflorescence on the ground (Williamson, 2010; Le Roux, et al, 2005; Eliovson, 1990; iNaturalist).