Home » GENERA I-L » Lachenalia » Lachenalia canaliculata top of the inflorescence
Back to Category Overview
Total images in all categories: 11,018
Total number of hits on all images: 5,656,348

Lachenalia canaliculata top of the inflorescence 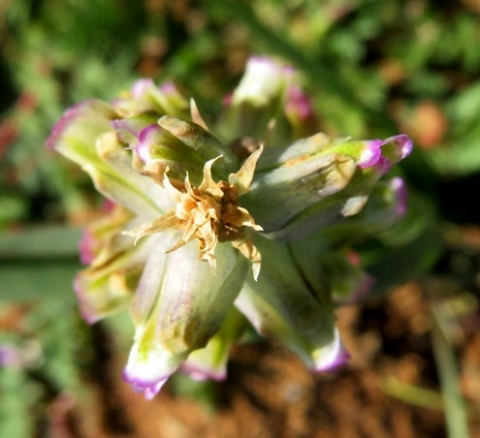 Seen from above, the Lachenalia canaliculata raceme displays some of the small, pointed bracts growing below each flower but usually concealed in the dense spike. These upper bracts seem to have formed normally while their respective flowers never materialised.

The lower tepal tip of a L. canaliculata flower that sags lower than the other two inner tepals forming the perianth mouth, may also be long, protruding further than the others (Leistner, (Ed.), 2000; iNaturalist; www.pacificbulbsociety.org).