Home » GENERA I-L » Lachenalia » Lachenalia canaliculata
Back to Category Overview
Total images in all categories: 11,018
Total number of hits on all images: 5,656,285 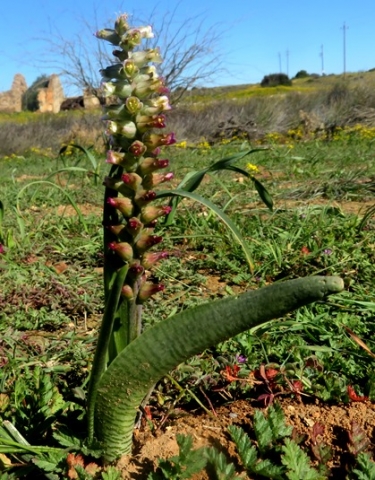 Lachenalia canaliculata is a deciduous, bulbous perennial growing annual above-ground parts to heights from 15 cm to 45 cm. The globose bulb is covered in fine dark tunic layers with fleshy, white roots spreading below it.

The many sessile flowers point outwards, their short, broad-based tubes differently coloured on body and tip at both the top and the bottom of the spike. Old flowers (lower down) are green with dark purple-pink tips; upper flowers are almost white, their tips not as constricted as the old ones. The upper flowers are also paler in colour, sometimes white.

The habitat is succulent Karoo, fynbos and Nama Karoo near lowland areas on dolerite flats and outcrops. The plant is not considered to be threatened in its habitat early in the twenty first century (Leistner, (Ed.), 2000; iNaturalist; www.pacificbulbsociety.org; http://redlist.sanbi.org).