Home » GENERA I-L » Lachenalia » Lachenalia fruit
Back to Category Overview
Total images in all categories: 11,018
Total number of hits on all images: 5,656,411 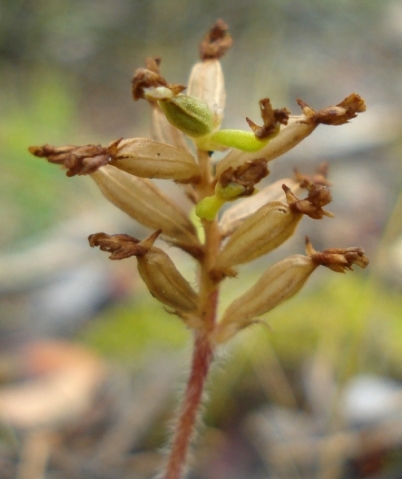 Well past the flowering stage, the fruits have already formed on this Lachenalia plant. Lachenalia fruits are three-angled or three-winged, the seeds many and rounded. The green fruits have ripened here to a pale buff colour, the bracts and remains of the corolla persistent upon them.

This plant was found in a large stand of Lachenalia rosea, but confirming its specific identity awaits information regarding the white hairiness of the flower stalk, not seen on the plants still flowering.

There are about 110 species of Lachenalia in southern Africa of which 70 occur in the fynbos.

Lachenalias, as many other bulbous plants, are grown sexually from seed, as well as vegetatively from a variety of natural and artificial processes. These methods include bulbils, offsets, division, leaf cuttings, scaling and micro-propagation or tissue culture.

This tissue culture is a technical laboratory process originating in Germany during the early years of the twentieth century. It allows for the production of thousands of plants from a single leaf (Manning, 2007; www.pacificbulbsociety.org).