Home » GENERA G-H » Heliophila » Heliophila rigidiuscula
Back to Category Overview
Total images in all categories: 8,979
Total number of hits on all images: 3,981,447 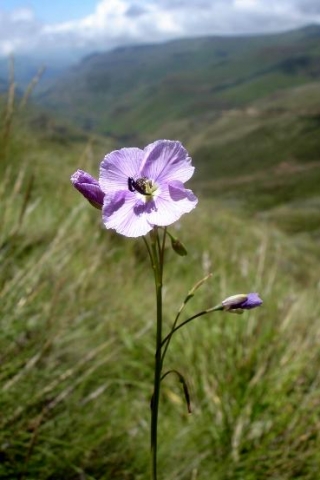 Heliophila rigidiuscula is a perennial herb with annual stems growing to 90 cm from its perennial woody base. The leaves are narrow, scattered along the stems and up to 7 cm long; those higher up are thin like filaments.

Racemes of sometimes drooping, pale mauve or violet flowers on long pedicels are borne from midspring to early autumn. The four rounded and spread petals of the corolla overlap. They are whitish at the base, their surfaces covered in straight veins, radiating from each petal base to its finely, irregularly shaped margin. The fruits are beaked pods on long stalks, each bearing four to eight seeds.

This species occurs widely in grassy hills of the eastern parts of South Africa, from the Eastern Cape to Limpopo, as well as in Lesotho and Swaziland. There are 85 species of Heliophila in South Africa. This flower was found in the Mkhomazi Wilderness Area in KwaZulu-Natal in January (Manning, 2009; JSTOR; iSpot).