Home » GENERA G-H » Heliophila » Heliophila suavissima
Back to Category Overview
Total images in all categories: 8,979
Total number of hits on all images: 3,981,871 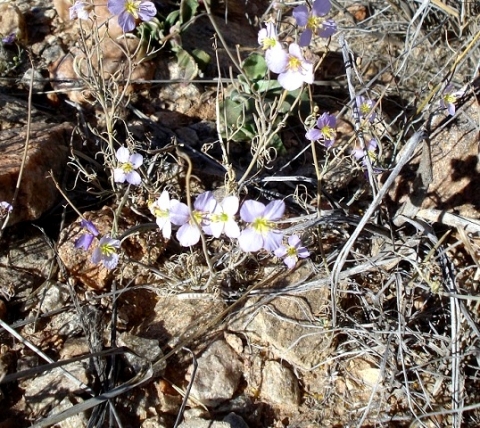 Heliophila suavissima, in Afrikaans the ruikpeperbossie (small aromatic pepper bush), grows widespread in South Africa, apart from north of the Vaal River. It is found in areas varying much in rainfall and temperature. The plant is a perennial reaching 60 cm, growing lax, branched stems from a woody base, a suffrutex.

The leaves are narrow, awl-shaped, about 1 mm wide and 5 mm long. They are often bunched near branch ends, dropping off to expose slender, pale grey-green stems.

H. suavissima is palatable to livestock and game and commonly much browsed. Being adapted to many varying conditions and having a large distribution area, the species is not currently decreasing in its natural population and thus not considered to be under threat early in the 21st century.