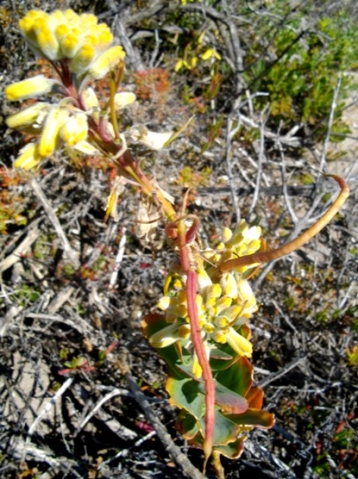 Heliophila linearis var. reticulata is a perennial that grows erect stems to 90 cm. The older main branches become somewhat woody. The leaves are broadly elliptic to ovate, clasping the stem. In the photo they are glaucous and covered in a whitish bloom. The leaf margins are entire, red in picture.

The plant grows on sandy coastal flats in the Walker Bay area from Hawston to Stilbaai. The plant is considered vulnerable early in the twenty first century due to degeneration of its coastal habitat. This specimen was photographed near the beach at Vermont (Privett and Lutzeyer, 2010; Bond and Goldblatt, 1984; iSpot; www.redlist.sanbi.org).