Home » GENERA G-H » Heliophila » Heliophila suavissima flower
Back to Category Overview
Total images in all categories: 9,177
Total number of hits on all images: 4,098,645 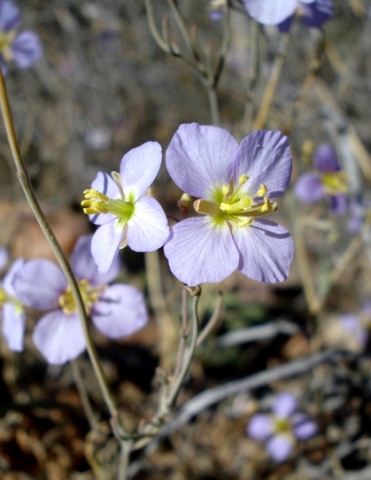 The flowers of Heliophila suavissima grow in short racemes. They are blue-purple to lilac in colour; fragrant in the evening. The four rounded petals have entire margins, spreading to 1,5 cm across. Narrow, oblong sepals can be seen partly erect among the petals. The petals have green colouring at the base.  A ring of spreading stamens hold up yellow anthers around the sturdy style. Suavissima means very charming, an epithet that nobody will begrudge the flower.

Flowering begins in autumn and lasts until early spring. Flowers close at night and tend to do so in cool weather. The fruits are flat, almost linear and pod-like, with slight indentations between the individual seeds, thus creating a beady effect.

The genus, commonly known as sporrie, has several species among the well-known Namaqualand flower season specialities, although this species grows in more easterly regions of South Africa, from the Karoo to KwaZulu-Natal (Vlok and Schutte-Vlok, 2010).