Home » GENERA G-H » Heliophila » Heliophila collina flowers
Back to Category Overview
Total images in all categories: 9,177
Total number of hits on all images: 4,098,600 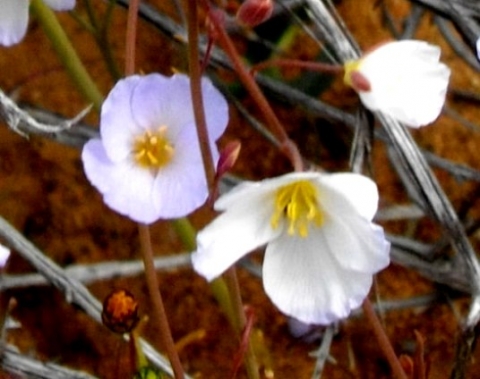 Previous
Image 6 of 31
Next

The flowers of Heliophila collina, white or nearly so, have four thinly textured petals that are well rounded, tapering to the base.

One brownish, elliptic sepal is visible upon a half-closed flower, showing the difference in length between sepal and petal. The petals form a wide bowl for a time, their sides overlapping before they spread more fully around the six stamens comprised of short filaments and pale yellow anthers. The style in the centre is slightly taller than the stamens. Flower diameter is from 8 mm to 10 mm.

Flowering happens in late winter and early spring, the photo taken in September.

The fruit that follows the flower is long, plump and beaded or constricted around each seed, called a siliqua. A siliqua, the Latin word for pod, is a type of fruit capsule consisting of at least two carpels and is more than three times longer than it is wide; a short one would be referred to as a silicle. Siliquas are often found on plants of the Brassicaceae or cabbage family to which Heliophila belongs.