Home » GENERA G-H » Heliophila » Heliophila collina
Back to Category Overview
Total images in all categories: 9,431
Total number of hits on all images: 4,237,077 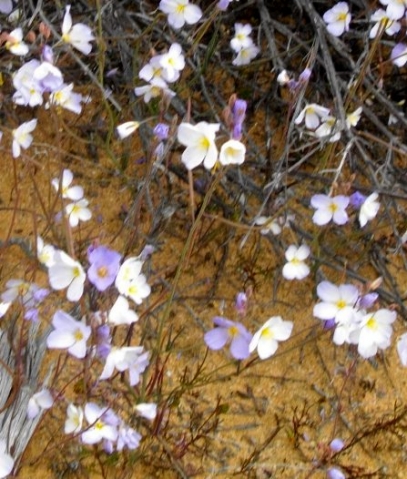 Previous
Image 1 of 31
Next

Heliophila collina, in Afrikaans known as Bokkeveldflaks or witblom (white flower), is a slender, hairy annual reaching 20 cm in height. The white or almost white flowers fade to bluish purple as seen in the photo. Seen from above, the sepals are only visible in the gaps between the petals once the flower is widely open.

The plants grow in the southwest of the Northern Cape and the north of the Western Cape on the Bokkeveld Plateau, the Roggeveld Escarpment and in the Ceres Karoo.

The vegetation types comprising the habitat of the species include arid fynbos, montane renosterveld and succulent Karoo. The soils vary from sandy to red tillite clay and doleritic clay, often in rocky terrain. Low winter rainfall characterises much of this fairly arid region. The plants shown in this Album were photographed at Kagga Kamma in September.

The species is not considered to be threatened in its habitat early in the twenty first century, since it is weedy, thriving in disturbed soil or overgrazed land associated with agriculture and other land development (Manning and Goldblatt, 1997; Bond and Goldblatt, 1984; www.redlist.sanbi.org).