Home » GENERA G-H » Heliophila » Heliophila collina fruit
Back to Category Overview
Total images in all categories: 9,177
Total number of hits on all images: 4,098,436 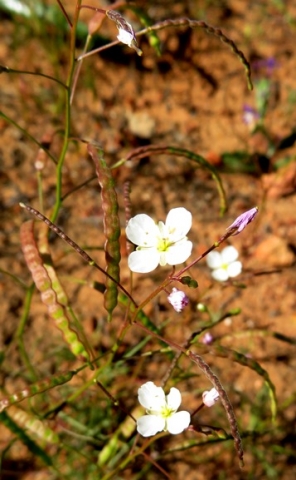 Previous
Image 7 of 31
Next

The beaded Heliophila collina fruit resembles a narrow pod, somewhat like those of the Fabaceae family. It is, however structurally different, called a siliqua.

A siliqua is a dry, dehiscent, elongated fruit, characteristic of the mustard or Brassicaceae family. It is formed from a superior ovary comprised of two carpels. The two placentas are positioned on the inside walls of the two chambers separated by a thin partition. The two valves that open when the fruit dries fall away from the frame, the central partition on which the seeds are borne.