Home » GENERA G-H » Heliophila » Heliophila juncea
Back to Category Overview
Total images in all categories: 9,840
Total number of hits on all images: 4,472,953 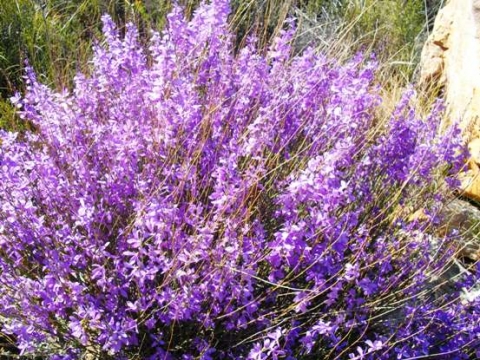 Heliophila juncea is known as wild stock, in Afrikaans as bergviool (mountain violin) or blouriet (blue restio or reed) and earlier, in scientific terms, as Brachycarpaea juncea.

The plant is variable in its growth forms, often producing erect stems to heights around 1 m. The woody rootstock resprouts after fire. In the more arid parts of its distribution as here at Kagga Kamma, where the H. juncea photos given in this Album were taken, the plants tend to be shorter.

Leaves were not much seen on the plants photographed in September. They are narrow to oblong, up to 5 cm long and 5 mm wide, although rarely achieving that.

The species distribution is widespread, mainly in the Western Cape. It also occurs in the south of Namaqualand in the Northern Cape and in the west of the Eastern Cape to Kareedouw.

The habitat is renosterveld and dry fynbos in rocky and loamy, sandstone-derived soils. The species is not considered to be threatened in its habitat early in the twenty first century (Vlok and Schutte-Vlok, 2010; Manning, 2007; iSpot; www.redlist.sanbi.org).