Home » GENERA C » Colchicum » Colchicum capense
Back to Category Overview
Total images in all categories: 10,855
Total number of hits on all images: 5,508,187 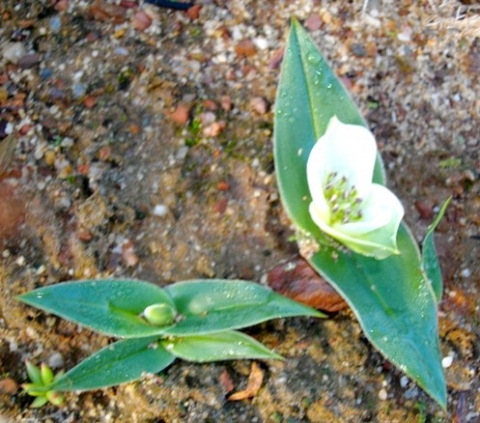 Colchicum capense is a stemless, cormous perennial with lance-shaped leaves that taper to acutely pointed tips. The alternate leaves, channelled along their midribs, in turn sheathe the stem. Fine hairs grow along the leaf margins. The leaves become about 15 cm long.

White bracts above the green leaves subtend the tiny, erect flowers in the centre. These broad short floral bracts tend to be orientated in line with the leaves in distichous arrangement. The bracts may be green-veined, the veins running parallel from base to tip, or faintly flushed green.

The species distribution is mainly the far southwest of the Western Province, extending northwards into Namaqualand. The habitat is damp clay and loam soils. The species is not considered to be threatened in its habitat early in the twenty first century.

There is a subspecies, subsp. ciliolatum with short, broad leaves and bracts. There a possibility that the plant in picture is that subspecies. There are also subsp. capense and subsp. burchellii (Manning, 2007; iSpot; www.redlist.sanbi.org).