Home » GENERA C » Colchicum » Colchicum circinatum
Back to Category Overview
Total images in all categories: 10,855
Total number of hits on all images: 5,508,200 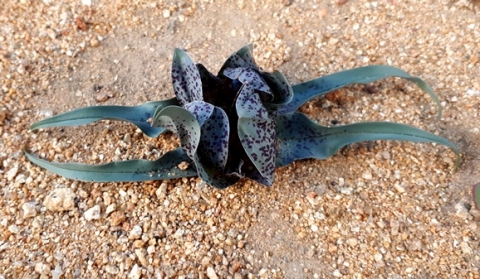 Previous
Image 1 of 22
Next

This plant seen in the Goegap Nature Reserve is thought to be Colchicum circinatum. Apart from subsp. circinatum also shown in this Album, there is a second subspecies known as subsp. vestitum. It is not certain whether the plant shown here is subsp. vestitum.

The long, narrow leaves attenuate abruptly beyond the central floral structure. Their elongated tips with channelled midribs taper to acute points. It appears as if the underground bulb has split after an earlier blooming season, sending two adjacent stems sheathed within their opposing leaf pairs up this season.

Broad, erect floral bracts with rounded tips curve in protectively over the shy flowers in the centre. These bracts are glaucous or blue-grey with dark maroon spots scattered across most of both surfaces.

Similar spots are present on the lower parts of the same coloured leaves. The leaves spread on the sandy to gravelly ground on opposite sides of the inflorescence.

This colouring and dots also appear on the short, broad leaves of another Colchicum species, C. vanjaarsveldii. Many Colchicum species have fairly bright green leaves and bracts in various colours (Williamson, 2010; iNaturalist).