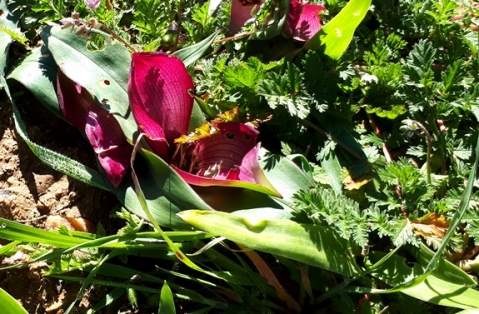 Previous
Image 5 of 22
Next

Colchicum coloratum subsp. coloratum, the red cup-and-saucer and in Afrikaans the rooipatrysblom (red partridge flower), is a low-growing, stemless geophyte. It grows annual leaves and a flower from the perennial corm.

The two lance-shaped leaves lie opposite each other on the ground, the flower between them. The dark green leaves taper to acute tips, their midribs recessed. The leaf margins are minutely fringed, sometimes wavy.

The corm may divide on older plants as in the photo, additional leaf pairs and flowers forcing their way onto the scene in cramped style.

The species distribution is restricted to an area in the southwest of the Northern Cape and the north of the Western Cape. The photo was taken a few kilometres west of Nieuwoudtville.

The plants usually grow in heavy red clay on dolerite slopes and flats. The status of the species is taxonomically uncertain.

There are two or possibly three subspecies of C. coloratum. Subsp. burchellii has white bracts, while a possible other, subsp. pulchrum also has red bracts, maybe duller. The latter subspecies used to be a species in its own right, C. pulchrum, now usually sunk into C. coloratum subsp. coloratum (Manning and Goldblatt, 1997; iNaturalist; http://redlist.sanbi.org).