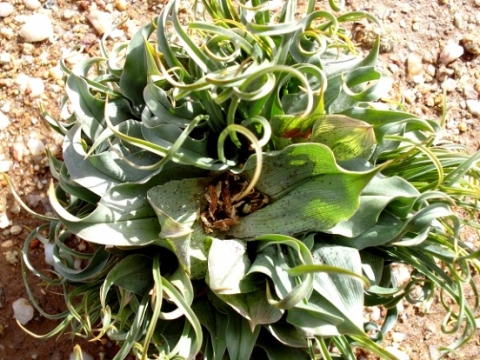 Previous
Image 4 of 22
Next

Colchicum circinatum subsp. circinatum is a perennial with an underground stem to the deep-seated corm. The leaves are very wavy and curling, appearing around the flowers just above ground. The plant shown here has matured into a clump.

When young, the flower in the centre is notable for the prominent, brown or white and brown anthers that stand erect in a ring. Around the anthers are narrow, claw-like tepals, small compared to the bracts spreading flatly around them. These floral bracts are broad, longitudinally lined and purple spotted; the leaves below them are narrow and long.

In the photo the flowering is already over, the tepals and anthers collapsed; no longer in position. The distribution of the plant is from the Richtersveld southwards to the border of the Northern Cape. The picture was taken in Okiep.

The habitat is sandy soil in arid land with winter rain and hot summers. Colchicum plants usually lose their above-ground components in summer, but the one shown here had much green and just finished flowering by February (Williamson, 2010; iSpot).