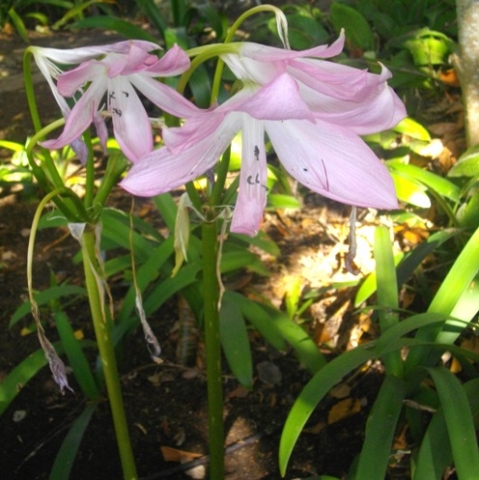 Crinum moorei, the Natal lily, is a geophyte, a perennial growing annual leaves and flowers from a large underground bulb of about 19 cm in diameter. The bulb attenuates on top into a long, stem-like neck usually exposed above-ground. The bulbs multiply to form clumps.

The soft, bright to dark green leaves have distinct midribs and slightly wavy margins. The leaves grow in a rosette; they narrow to both tip and base. Leaf dimensions are from 65 cm to 1,5 m long by 6 cm to 12 cm wide.

The distribution is mostly coastal in KwaZulu-Natal and the Eastern Cape. The plants are often found in large stands in their damp, marshy habitat of forest shade near the coast and along watercourses. The plant may become dormant in excessive summer heat.

This least common of South African Crinum species is considered vulnerable in habitat early in the twenty first century, its population decreasing mainly due to harvesting for the traditional medicine trade (Pooley, 1998; Manning, 2009; Duncan, 2010; www.redlist.sanbi.org).