Home » GENERA B-C » Crinum » Crinum graminicola
Back to Category Overview
Total images in all categories: 8,883
Total number of hits on all images: 3,862,724 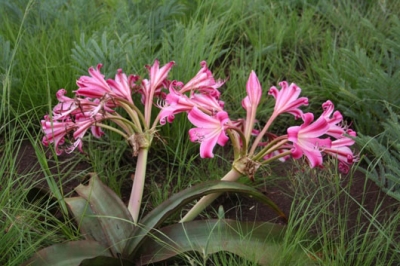 Previous
Image 3 of 15
Next

Crinum graminicola inflorescences are spectacular in the summer rainfall grassland of northeastern South Africa. The plant is common in Gauteng. They are encountered from mid-spring through summer. This plant was photographed during January in the Rhenosterspruit Conservancy.

The trumpet-shaped lily flower starts off erectly as a bud, drooping or inclined when fully open. The slender perianth tube becomes from 7 cm to 11 cm long. The lance-shaped tepals are from 8 cm to 9 cm long, their tips recurving strongly. Each white tepal has a dark pink median keel band.

The stamens are angled downwards from the flower centre around the ovary, curving up before they reach their anthers. The style is longer than the stamens.

The species is not considered to be threatened in its habitat early in the twenty first century.

The crinums are popular because of their looks and the success that many gardeners have with them. Maybe the genus was named Crinum suggesting white lily before all the colourful species were known.

Bulbous plants store nutrients for periods of dormancy and hardship when nutrients cannot be produced, but lived on from available reserves (Duncan, et al, 2016; iSpot; http://redlist.sanbi.org).