Home » GENERA B-C » Crinum » Crinum moorei flower
Back to Category Overview
Total images in all categories: 8,960
Total number of hits on all images: 3,972,471 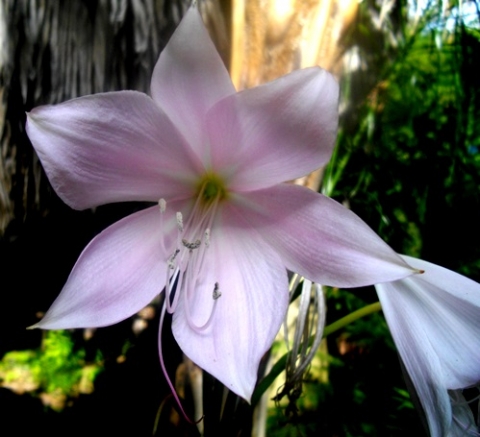 The Crinum moorei flower may display a very fine tinge of pink on the inside of its tepals. They overlap slightly, broadening from the base to widest nearer tip than base (obovate or oblanceolate), before tapering to acute tips that recurve only slightly.

The six long stamen filaments emerging around the green ovary are angled downwards, parallel to each other and close together before arching upwards in formation like a squadron of aeroplanes in an air show. The black and white anthers are narrow and about cylindrical.

The style, longer than the stamens and white like them near its base, sags below the rest in the photo, shading to dark purple at its tiny stigma (Duncan, et al, 2016).