Home » GENERA B-C » Crinum » Crinum macowanii buds
Back to Category Overview
Total images in all categories: 8,883
Total number of hits on all images: 3,862,724 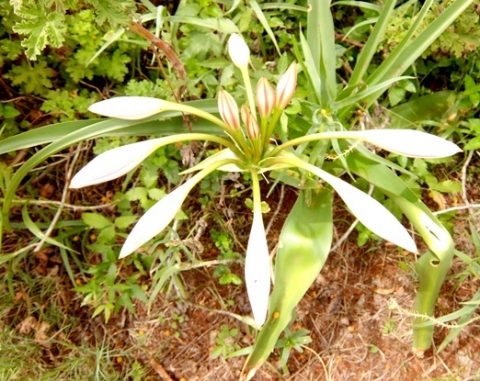 These Crinum macowanii buds seen in January in Pretoria are soon losing the reddish stripes along the centres of their tepals, even before they open. The small erect ones still coloured, the longer, spreading ones to open first already white.

The flowers all grow from the top of a compressed, solid scape. Two triangular, whitish and pointed spathe valves are visible below the flower pedicels at the top of the scape. They were initially folded over the cluster of (then) very small buds that have pushed them aside early in their development (Leistner, (Ed.), 2000; Manning, 2009).