Home » GENERA E-F » Erica » Erica subdivaricata
Back to Category Overview
Total images in all categories: 12,082
Total number of hits on all images: 7,379,586 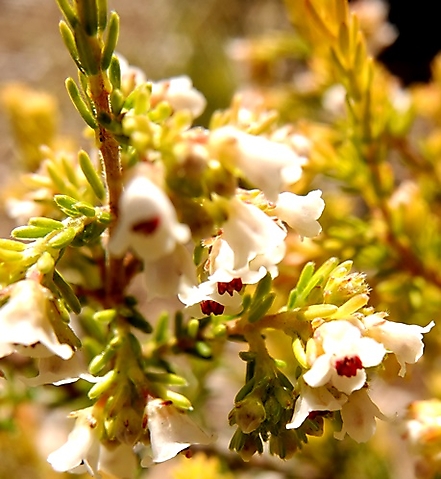 Erica subdivaricata, sometimes commonly called cup heath, is an erect to spreading shrub or shrublet in the Orophanes section of the Erica genus. It reaches heights to 1 m but often less than half that.  The sturdy, branched bushes tend to appear untidy.

The species distribution is in the Western Cape from the Cape Peninsula to Malmesbury and Worcester, Bredasdorp and the Agulhas Plain.

The plant’s habitat is lower fynbos slopes and flats. The species is not considered to be threatened in its habitat early in the twenty first century (Marais, (Ed.), 2017; Bean and Johns, 2005; Bond and Goldblatt, 1984; Kidd, 1983; iNaturalist; http://redlist.sanbi.org).