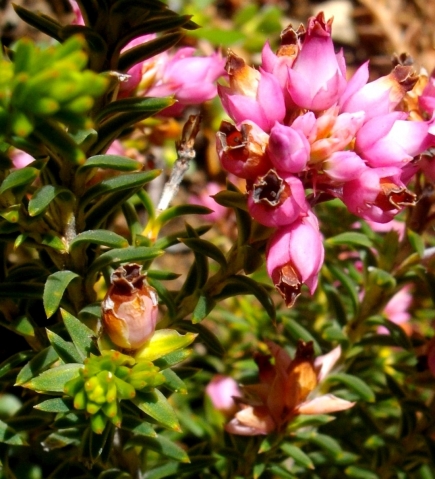 Erica taxifolia is an erect shrub growing numerous straight branches to 60 cm in height. The branches are hairy, becoming channelled with prominent leaf scars over time.

The Erica subgenus called Chlamydanthe comprises plants with large, conspicuous calyces and urn-shaped or nearly cup-shaped corollas. E. taxifolia falls within the Lamprotis section of that subgenus, the section typically having terminal flowers with parts occurring in groups of three, coloured sepals at least half as long as the petals and petals that spread when fresh, turning brown with age.

E. taxifolia is endemic to the Western Cape, growing on sandy or rocky mountain slopes in fynbos from Stellenbosch to Tulbagh in the north and Caledon in the east. The species is not considered threatened in its habitat early in the twenty first century (Baker and Oliver, 1967; www.plantzafrica.com; www.redlist.sanbi.org).