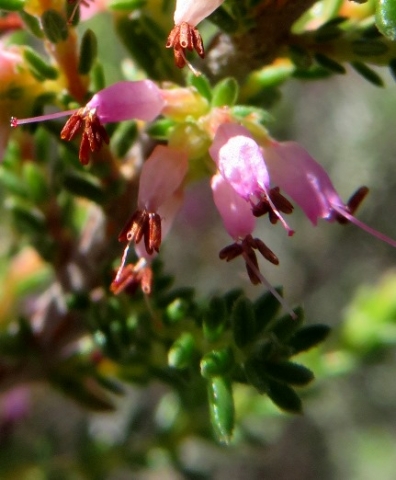 This Erica was photographed on the Piketberg Mountain in August. The flowers appear in small clusters, the corolla small and between tubular and narrowly urn-shaped, the brown anthers well exserted and the thin style even further.

The plant resembles Erica nudiflora, E. petraea (that only grows far to the east) and E. capillaris. No definitive identification could be made as none of them matched species information available exactly. One of these may still be the right answer, or another species that was not considered. A new species? This possibility is most unlikely in a place visited by so many people for so long and can fairly safely be ruled out.

Bear in mind that the fynbos alone is home to about 680 Erica species (Europe has 21). Some ericas do have unique features simplifying identification, but many share leaf, flower and habit characteristics in unique combinations. Individual differences within a species as well as gradual ranges of attribute modification also occur, causing confusion in species identification by leaving grey areas requiring judgment of incomplete information.

The size of the Erica genus has led to subdividing into sections, turning a search into a step-wise process of homing in on a result as the number of members of successive targeted groups diminish (Baker and Oliver, 1967).