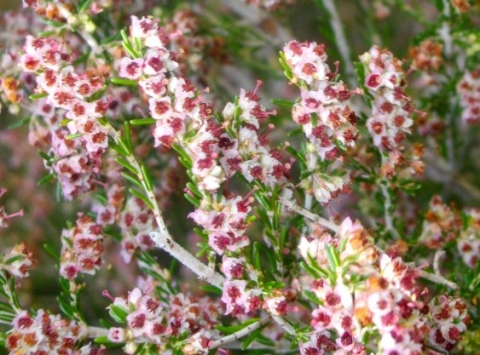 The flowers of Erica sparsa occur in groups of three at the tips of small side-branchlets. The plant can be many-flowered in its long blooming season that lasts from autumn to spring; nothing sparse about this generous blooming that offers much work and reward to the insects that pollinate the flowers, particularly bees.

E. sparsa flowers are small, about 1 mm long, presenting an open cup-shape. The calyx is pink, pale pink or nearly white like the corolla, but less than half its length and hairy along its margins, unlike the hairless corolla.

The brown to almost blackish purple anthers are not exserted as the style, but still conspicuous in the open corolla cup that is not pendulous. The stigma is large and flat or cone-shaped (Vlok and Schutte-Vlok, 2010; Baker and Oliver, 1967; www.plantzafrica.com).