Home » GENERA E-F » Erica » Erica strigilifolia
Back to Category Overview
Total images in all categories: 11,506
Total number of hits on all images: 6,491,685 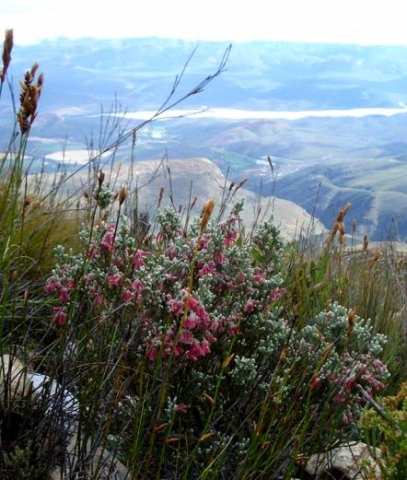 Erica strigilifolia is an erect shrub of the Dasyanthes section of the Erica genus growing slender, hairy branches to heights around 1 m. The white stem-tip hairs are about as conspicuous on the plant in picture as the pink flowers.

The species distribution is in the east of the Western Cape, in the Little Karoo from Montagu to Uniondale and maybe into the west of the Eastern Cape in the Kouga Mountains.

The habitat is rocky upper slope and mountain top fynbos in moist places, the plants particularly known in association with the Swartberg Mountains. The species is not considered to be threatened in its habitat early in the twenty first century.

There are two varieties, viz. var. strigilifolia and var. rosea. There is also much similarity with E. pectinifolia, a lowland, more easterly distributed species of drier habitat. E. pectinifolia differs in its calyx lobes and bracts that are wide above and narrow, claw-like below, as well as in its anthers that have no tails (Vlok and Schutte-Vlok, 2015; Moriarty, 1997; Baker and Oliver, 1967; iNaturalist; http://redlist.sanbi.org).