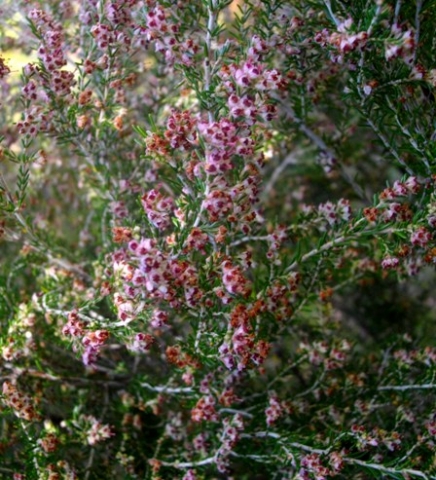 Erica sparsa, commonly known as ker-ker or pink-smoke heath, is an erect shrub growing from a single stem to 2 m in height. Single-stemmed shrubs do not resprout after fire. Upper stems in picture are notably pale.

The species forms part of the Polycodon section of the Platystoma subgenus of Erica. This subgenus comprises plants with inconspicuous sepals and bell-shaped, open corollas. Polycodon species have terminal flowers, their parts typically occurring in groups of three, while the corollas are small (less than 3 mm long) and their anthers lack awns or tails (muticous).

The species distribution in the Outeniqua Mountains of the southern Cape where the plants grow in a moist fynbos habitat extends eastwards to Port Elizabeth. It is particularly abundant near George and Knysna.

This plant is not considered threatened in its habitat early in the twenty first century (Vlok and Schutte-Vlok, 2010; Baker and Oliver, 1967; www.plantzafrica.com; www.redlist.sanbi.org).