Home » GENERA E-F » Erica » Erica sessiliflora fruit
Back to Category Overview
Total images in all categories: 11,894
Total number of hits on all images: 7,136,548 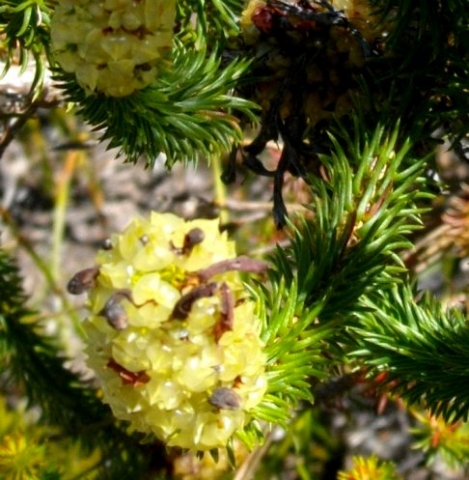 The enlarging sepals that survive the tubular flowers of Erica sessiliflora clump together in a compact bulge at or ring around a stem-tip. This initially lemon green, fleshy mass of hairless, densely packed sepals over time turns reddish, retaining a faint shine. It functions like a protective fortress around the slowly transforming ovaries that take more time growing their seeds than most ericas.

Persisting on the plant past fruiting and for several years, this feature makes E. sessiliflora an easily recognisable species throughout the year. When fire kills the plant the seeds are released, growing among the ashes in ground opened for seedlings to receive sunshine. Still pale here, the sepals clasp some withered corollas, dark like dead insect bodies on display.

The tapering tips of the narrow leaves in picture curve outwards. They are dark green and densely massed near the stem-tips (Baker and Oliver, 1967; Bean and Johns, 2005; Manning, 2007).