Home » GENERA E-F » Erica » Erica seriphiifolia
Back to Category Overview
Total images in all categories: 11,506
Total number of hits on all images: 6,488,509 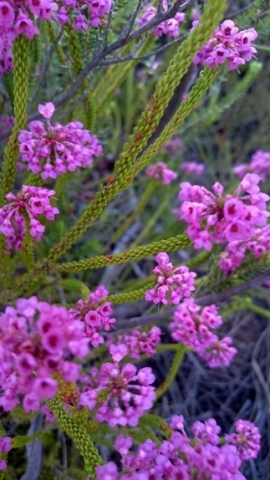 Erica seriphiifolia is a compact, erect shrublet reaching heights around 30 cm. This is a single-stem plant that reseeds after fire. The leaves grow in whorls of five or six around the stems. They are narrow, incurved although sometimes somewhat spreading, neatly imbricate and sometimes hairy.

The species belongs to the Melastomon section in the Platystoma subgenus of the Erica genus, plants with relatively inconspicuous sepals and obconic or bell-shaped, wide-mouthed flowers.

The cup-shaped flowers of E. seriphiifolia grow in clusters at branch tips. They are up to 4 mm long on flower-coloured, hairy stalks, the tiny green bracts well back from the flower. The coloured sepals touching the corolla are hairy along their margins, small compared to the widely flaring, rounded lobes of the corolla cup.

The dark anthers are not awned or tailed, forming a beak beyond the pore, the opening where the pollen exits. The anthers are positioned in a ring at the back of the cup, not protruding from the flower, while the thin white stigma is far exserted. Flowering happens in spring and summer.

The plant is distributed in the east of the Western Cape and the west of the Eastern Cape on lower to middle slopes of the southern Cape mountains, the Langeberg and Outeniqua Mountains. The photo was taken in fynbos on a southern slope in the Langkloof. The species is not considered to be threatened in its habitat early in the twenty first century (Vlok and Schutte-Vlok, 2010; Manning, 2007; iSpot; http://redlist.sanbi.org).