Home » GENERA B-C » Crassula » Crassula glomerata in dune sand
Back to Category Overview
Total images in all categories: 9,579
Total number of hits on all images: 4,307,272 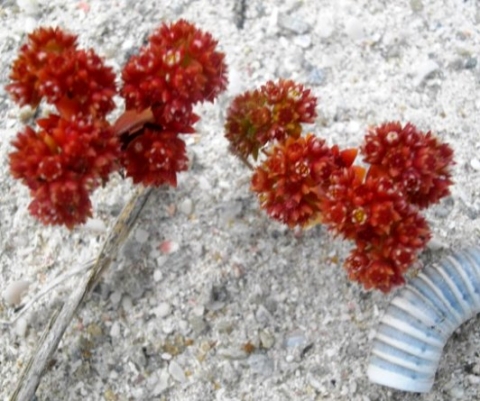 The flowers of Crassula glomerata are stalkless, growing in a flat-topped thyrse. Young petals comprising the five-pointed, cup-shaped to tubular corollas start off white or creamy white, but the small flowers worked over by the elements often appear reddish to pale brown, as does the total plant. Five yellow or brown anthers on the spreading stamens are positioned around the green or red stigma. Fleshy leaf-like sepals surround the corolla.

The ratio of blooms to overall plant size seen here indicates the vigour of the floral response, the importance of seed production. Flowers are produced from late winter to midsummer. This plant is not considered threatened early in the twenty first century (Privett and Lutzeyer, 2010; Bond and Goldblatt, 1984; iSpot; www.redlist.sanbi.org).