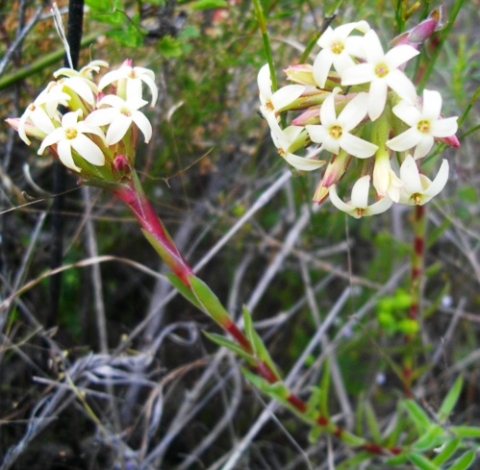 These long-tubed Crassula fascicularis flowers were seen in September near Greyton. The buds still to open are pink-tipped, the inside of the open corollas cream on this plant. The five spreading and recurving petals may also be white or tinted green.

Both the leaves and the individual flowers of this Crassula species are stalkless. The leafy stems bearing the flower fascicles are reddish purple. Even some of the leaves followed suit by adopting this in vogue colour near their bases... although green isn't boring in nature! The leaves are opposite on the stems in decussate pairs, their margins white from the tiny, recurved hairs that grow there.

This species is not considered threatened in its habitat early in the twenty first century (Manning, 2007; www.plantzafrica.com; www.redlist.sanbi.org).