Home » GENERA B-C » Crassula » Crassula hemisphaerica
Back to Category Overview
Total images in all categories: 9,385
Total number of hits on all images: 4,215,474 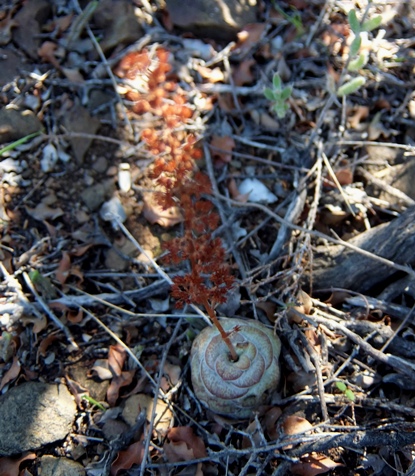 Crassula hemisphaerica, in Afrikaans known as the miskoekie (little cowpat), is a perennial succulent bearing annual flower stems up to 15 cm tall.

The small creamy white flowers are tubular, about 3 mm in length. They are spaced in branched clusters up the elongated flower stalk. Blooming comes in spring. This dry inflorescence photographed in April must be around six months old.

The species distribution is widespread, occurring from Namaqualand in the northwest, the succulent Karoo south to Worcester, the Little Karoo and eastwards to the Kouga Mountains. The habitat is karoid but diverse, plants often found under shrubs in clay soils. The species is not considered to be threatened in its habitat early in the twenty first century (Vlok and Schutte-Vlok, 2010; www.redlist.sanbi.org).