Home » GENERA B-C » Crassula » Crassula glomerata
Back to Category Overview
Total images in all categories: 9,579
Total number of hits on all images: 4,306,923 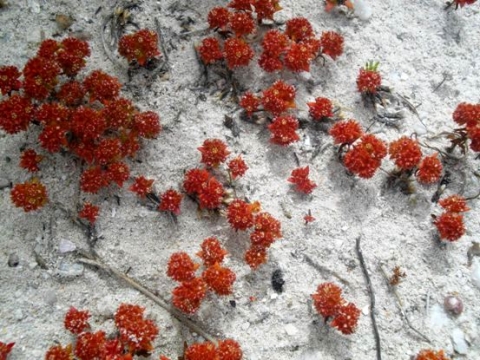 Crassula glomerata is a tiny annual, growing to 10 cm; often less as in the photo, rarely 15 cm and branched. It grows rigidly erect stems and small succulent leaves. The leaves are opposite and sessile, tapering to acute tips.

The habitat is sandy places, mostly strandveld and limestone soils, often in exposed situations where it braves wind and sun. The distribution is in the Western Cape from around Clanwilliam to the Peninsula and along the south coast to the Eastern Cape as far as Port Elizabeth.

The plant, its leaves, stems and flower calyces, may be green or quite red as seen here on a bare dune by the sea. Its appearance reminds of some tiny mesemb; the Afrikaans common name of brakvygie (brackish mesemb) is no surprise.

Salt from seawater is often this plant’s lot in life, requiring adjustment and resulting in the brakvygie name. Crassula species, like mesembs, are usually small leaf succulents, but their flowers are quite different: Crassula mostly five-petalled, while mesemb corollas consist of many petals, often linear and resembling daisies (Privett and Lutzeyer, 2010; Bond and Goldblatt, 1984; iSpot).