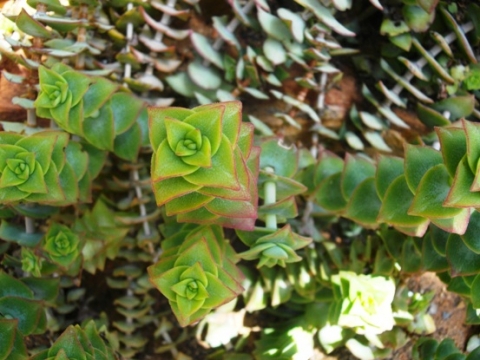 Crassula capitella subsp. thyrsiflora branches much and grows to about 20 cm. When the four geometric ranks of triangular succulent leaves on a stem grow well to a large size, the stem sags under the weight, rendering the plant decumbent.

Leaves may have a reddish tint in cold or dry seasons, variably green when things go swimmingly. There are five subspecies of Crassula capitella recorded in South Africa. Collectively their habitats cover a large part of the country. They produce small tubular white flowers after which the main plant dies, but new plants tend to grow from the old one’s base.

A C. capitella subsp. thyrsiflora inflorescence has a string of densely clustered, sweet-scented flowers. The sepals are pointed, fleshy and maroon in colour. Five pointed, white corolla lobes open to expose the stamens. Five dark anthers on white filaments tower in the corolla throat over the style.