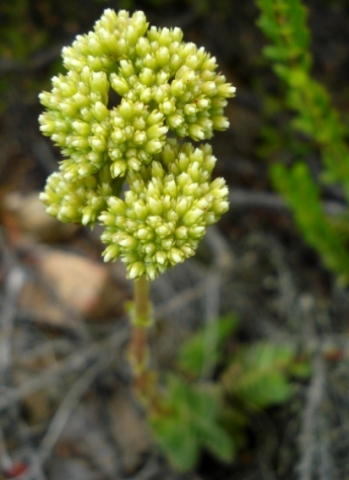 The flowering stem of Crassula ciliata is erect and tall, about 40 cm in height. The lower parts of the stems may be covered in closely spaced opposite leaves. Higher up, some smaller, spaced, leafy bracts grow on the stalk below the flowers, opposite each other in pairs and fused at the base like the leaf-pairs.

The many-flowered inflorescence was photographed at an early stage of the flowering event. It shows mostly pointed green calyces, the white outer surfaces of the corolla still furled in bud mode, surrounded by the erect sepal tips (Bond and Goldblatt, 1984; iSpot).