Home » GENERA C » Crassula » Crassula capitella subsp. thyrsiflora wrestling with the bush
Back to Category Overview
Total images in all categories: 11,793
Total number of hits on all images: 6,942,138 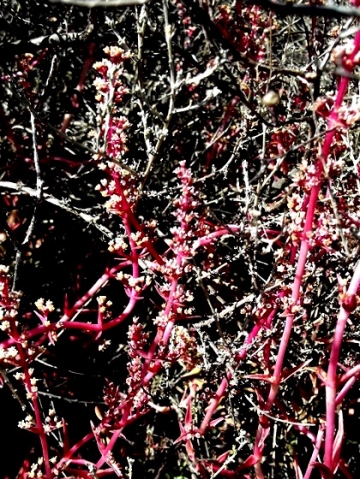 Somewhere in the renosterveld near Montagu large stands of Crassula capitella subsp. thyrsiflora were seen during March in parched conditions. Succulents can look a lot better in such times than some of their shrubby neighbours, not to speak of the grassy ones that have thrown in the leaf towel long ago.

The long red-purple flowering stems were more resolute about producing many flowers and seeds than about adhering to straight and erect. The spaced flower clusters occur in these plants above leaf-like bracts that are opposite and decussate up the stems between elongated internodes.

The ground-level leaf rosettes were mostly invisible among many other kinds of plants, all competing for space and contributing to dense groundcover duties for shared benefits after the long dry summer.

So, the stems had to be long to present these flowers above it all for their share of pollinator care. A great multitude of these crassulas were flowering in the tumult of leaves and stems, spread across a few square metres on the rocky outcrop that did not appear as if it was going to offer much.