Home » GENERA C » Crassula » Crassula capensis
Back to Category Overview
Total images in all categories: 11,793
Total number of hits on all images: 6,942,160 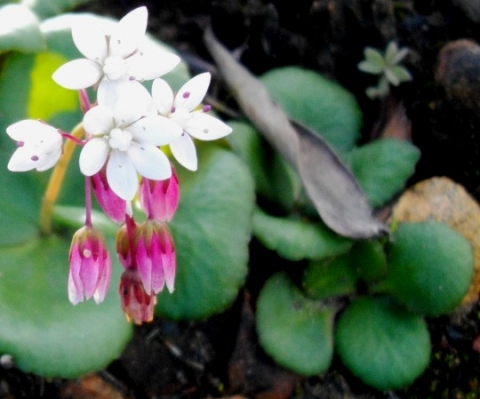 The flowers of Crassula capensis are cup-shaped and usually white, sometimes slightly pink, especially on the back of the petals as can be seen in this picture. Several are borne on the single erect stalk in an umbel structure.

There are five or six petals forming the flower cup, sometimes seven and occasionally up to nine petals as in the iSpot posting by John Wilson of a plant on Signal Hill (2012). Petal length varies from 3 mm to 8 mm. Petals taper to acute tips, the upper surfaces concave; petals do not recurve.

A stamen with a bluish purple anther is attached to each petal; some visible in the photo. The petal-stamen link is a feature of the Crassula genus. Other Crassulaceae genera like Cotyledon, Adromischus and Kalanchoe have two stamens per petal. A large white stigma can be discerned in the flower centres here.